BLAKE GRIFFIN DUNKS OVER A CAR 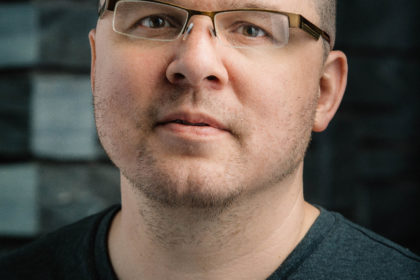 with a full gospel choir crooning behind him,
with twenty thousand spectators surging to their feet,
with an arena of flashbulbs flashing its approval,
and I’m spellbound, thinking it’s all so spectacular, until

the broadcast team weighs in,
and Charles Barkley says, “That wasn’t the greatest dunk,”
and Marv Albert says, “But the presentation was pretty fun,”
and I’m made to revisit what I thought I saw
as one question replaces all others—

Was it truly extraordinary? Or, by the paragon
of unimpeachable aesthetic standards by which
the annual NBA Slam Dunk Competition is adjudicated,
was it actually pedestrian, mortal, a somewhat meh occurrence
made mythic only through gimmicks and frills?

Like those little fish that eat bits of plastic
in the Pacific because they believe bits of plastic
look like microscopic food particles,
I too can be charmed by any well-made illusion.

Copperfield makes the Statue of Liberty disappear.
Penn and Teller catch bullets between their knowing teeth.

Smelling like a new vacuum cleaner, the conman in my heart
successfully hawks all his useless trinkets
to the hopeful stooge who stumbles through my brain.
Snake oil and radium ore. The furcula of a partridge.
The foot of a rabbit.  I want to believe

in the marvelous, not because it feels authentic,
but because the alternative

is a world where no one dons a cape to leap over buildings.
No one turns lead to kindness.
No one sings the kraken to sleep.

In a kingdom that insists on repudiating all enchantments,
I feel catastrophic and alone. I watch the trees get older.
I watch the ice form on their branches. Last winter,

I sat in an emergency room
after my wife collapsed at work.
Her doctors asked questions but provided no answers.
They sent us home not knowing
why, or what, or if it would happen again.

You can look for an explanation, but sometimes
there’s no wand to wave, no sorcery to make anything okay.
There’s just doubt, and it rocks us toward
whatever trick of light we’ll reach for next.

I will cling to any rationale offered.
I might pray or go to a church where a priest
tells a story about transubstantiation,
hands me a chalice filled with possibility.

And I know there’s no blood in there.
I know the wine will taste like wine. Still—
I lift the cup.

Matthew Olzmann is the author of Constellation Route as well as two previous collections of poems, Mezzanines and Contradictions in the Design. A recipient of fellowships from Kundiman, MacDowell, and the Kresge Arts Foundation, Olzmann’s writing has appeared in Best American Poetry, Kenyon Review, New England Review, Brevity, Southern Review and elsewhere. He teaches at Dartmouth College and in the MFA Program for Writers at Warren Wilson College.

THE NATURE OF LOVE by Aaron Belz