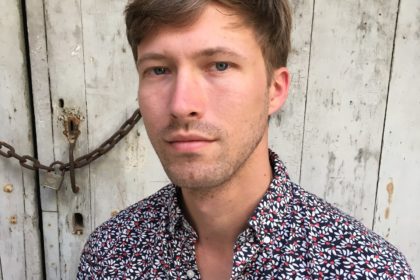 500 bluegill in a tank
on the back of a truck,
parked on the bank,

pouring them out. Fifth grade,
early spring. The year
I was taught there were right

and wrong ways to be
a man. I watched
the waterfalling bodies

of the fish, our pond
like a holding cell.
When the valve closed,

one got caught and cut
in half, the top fin and tail
just sat there in the grass,

separated from the head
still floating in the tank.
We caught them

all summer, kept them
on a line strung through
the gills. I hooked one

through the eye, snagged it
through that soft
and lidless spot, and the barb

came out through the front
of its face. I cried while
my father removed it.

I watched while he filleted
our catch, when he nailed
a catfish to a board

and skinned it with pliers.
What else can I say
about my cicada-sung

childhood, when I learned to do
things I didn’t want to—
years later when I danced

with a girl at prom,
when I did not kiss
the boy I drove home

from school, when he
offered. But when
I was nine my trembling

hands were asked to hold
the handle of a thin blade
and cut. So I did—

and for what? A quarter-inch
thick fillet, small victory.
We ate the fish

with our hands, battered
and fried on a camp stove.
When we stocked the pond,

a mist came off
the cascade of water
and fish, the surface

in a camp chair,
months later, picking
little bones from my teeth.

And suddenly the ground opened
so I could fall in. The hard clay

mother’s irises in the garden. The air thick
with cicada calls, the air hanging

on skin. She’s at the window calling out
the varieties of corn in the field like

calling in children for dinner.
But I am her only, her runaway.

of iron, red like the banks of the creekbed
I fell down as a child, flat on my back,

eyes and palms to the sky, gasping.
My body remembers

that labored breath, these old pollens.
In the cabinet I find a cream

to prevent scars from new wounds,
another to reduce scars already set in.

But as a child I had no scars,
only musical names in my head before sleep,

Jim Whiteside is the author of a chapbook, Writing Your Name on the Glass (Bull City Press, 2019) and is a Wallace Stegner Fellow in Poetry at Stanford University. His recent poems have appeared or are forthcoming in Ploughshares, The Southern Review, Pleiades, Crazyhorse, and Gulf Coast. Originally from Cookeville, Tennessee, he holds an MFA from the University of North Carolina at Greensboro and lives in Berkeley, California. 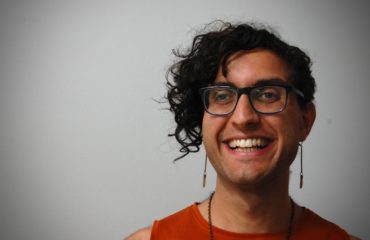