I had been afraid of the cold silent body I held to my belly but when we at last reached the engine and clambered up the frozen metal ladder and into the relative warmth of the interior, the child jerked awake and began to wail, a thin, gasping sound that bit directly into my heart. Alive. The babe was still alive.
How long I had been outside in the blizzard I did not know; it could not have been more than five or ten minutes and yet I was shivering with cold. The baby’s parents were entirely soaked through, the girl’s lips a faint, pale blue. The young man had found the heater and stood before its orange filaments, rubbing his hands. His eyes looked wild, hair matted to the shape of his skull, teeth clenched down in his jaw. Jeans and a thin denim jacket. At his feet rested a shapeless knapsack, soaked through and dripping.
“Blanket up there,” I said to the girl.
She reached for it and when she made no move to take the child from me I nodded down into the well of my coat. “She’s OK,” I said.
Still the girl said nothing. Probably no older than sixteen or seventeen, her clothes utterly insufficient for the weather: a thin sweater, threadbare skirt, canvas shoes still caked with ice and snow. When she looked up at me through her lank hair, her hollow eyes spoke only of exhaustion.
“You’ll need to take her,” I said “I gotta get this thing moving.”
Only then did she step forward, hesitantly, as if unsure of what I meant to do, but she took the child. That warmth moving away from me.
Then I was at the controls again and the engine took up its growl and began to slide forward. Relief that it had not frozen to the rails. “Coffee in that Thermos there,” I said over my shoulder. Later I said my name.
“Tommy,” came the response from behind me. “And here’s May.”
The plow was moving and I had cranked up the engine to regain its speed, the whole machine vibrating with barely restrained fury. “You might all’ve froze,” I said.
“I think we did,” Tommy said.
As if in response, the baby resumed its mewling cry. I did not turn. “Girl or boy?” Beyond the window glass: the onrush of snow.
May’s voice was small and thin. “Jilly,” she said.
“Little Jilly,” I said.
“No,” she said. “Just Jilly.”
A child with a child, I thought.

After my crack-up, they took me off freight and assigned me to the plow engine where there was almost no chance I would see a single living soul on my runs back and forth across the pass. In the first years on the mountain, I could still sometimes see the girl I had killed, her body turning to meet the engine as if greeting a friend. Martha Evans had been twelve years old on the bright spring afternoon that my locomotive had dismembered her and although I knew—and had been assured over and over—that her death was in no way my fault, the vision of her continued to haunt me. I had lifted the pieces of her from beside the tracks and under the freight cars and had set them next to the locomotive in some approximation of her living shape as if she were a doll that only needed stitched back together.
In the weeks and months that followed, I wanted only to be left alone. It did not seem too much to ask and indeed my coworkers and dispatcher were kind enough to give me that much and to keep me employed when I probably should have been let go, my dependence on alcohol being such that I could not much be trusted around heavy equipment. And yet the plow had provided a way back for me, the locomotive’s handling requiring all my skill as an engineer and its blade producing an effect that was tangible and immediate. The way before was obscured by hissing snow and the great spreader blade did its work so that my path was marked by clean silver lines of track that extended on into the darkness, ready for whatever train was next to come.
My solitude had felt like penance at first, the little girl’s unconcerned gaze staring back at me from around each bend in the rails, but that too faded with time until my loneliness came to feel more like meditation than anything else, the blurred snow outside the glass swirling and the train invisible under its flow such that I oft felt as if I had become wholly untethered from the world of men. I could read the hidden topographies of that trackless snowfield as if all of it were part of my body: turns and twists and wildly descending slides and hard uphill climbs.
And then you. And everything to come after.

Christian Kiefer is the director of the Master of Fine Arts in Creative Writing at Ashland University and is the author of The Infinite Tides (Bloomsbury), The Animals (W.W. Norton), One Day Soon Time Will Have No Place Left to Hide (Nouvella Books), and Phantoms (Liveright/W.W. Norton). 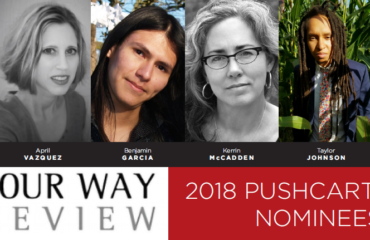 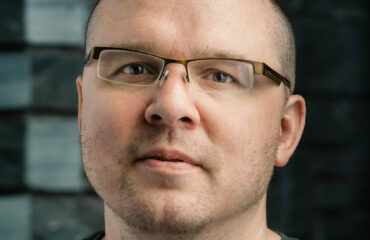