Rosa, a girl in a story, a name I happen to like. She’s a girl with a father who follows her to the ends of the earth as she follows a story, a myth, an incantation.

Her parents would like her to finish her homework.

She covets the gypsy’s wide skirt, the nun’s collar, her mother’s braid.

She rides up on a horse, plants her bloody hand on the wall of a church, makes her mark.

In the street, she breathes polluted air, lets her father, a man, buy her a drink made of almonds. Says merhaba, says teshekur ederim, turns away from her father. Wants a boy. Wants a penis.

She leans forward in her chair. Can he feel her movement?

She leans, examining him, sees waves break over his gentle face.
She sees him but he can’t see her.

She trusts his x-ray vision, a function of his heart.

Her mother in a braid, her mother in pigtails.
Her brother, a genius or a fool.
They’re all fools.
She twirls in her skirt, her hands tilted toward god.

Naked beneath her skirt, she is breezy.

What would Gertrude Bell say?
Isabelle Eberhardt, where are you?

What does Rosa know about Gertrude Bell?
That she was a highly accomplished virgin, an adventuress, (never an adulteress), a linguist, a diplomat.

She’s in the desert, immaculate and alone:
She walks white sand until it’s in her throat and lungs. Coughs sand like granulated sugar, can’t stop rubbing her eyes.

The Bedouin boys appear and dance the depth-negating dunes.
Their bodies are short, wiry, powerful. (She realizes a new incarnation of her own every hour.)

In the almost-cold dawn, they offer  her the thinnest version of bread she’s ever eaten, just-baked over hot stones. She takes the bread, aiming for diplomatic distance, can’t help but offer them a glimpse of her eyes, which sparkle.

Her head is covered in yards of white linen.

His heart, his eyes

His heart is oval-shaped, with honeycomb compartments, each containing a patient, a little like her. She’s young; she lives on the bottom floor. (There’s an old man with a hack who lives above.)

She wants to touch his blind eyes.
Isabelle Eberhardt would do it; Gertrude Bell would not.

One of these days. In the meantime, bide your time.

(Isabelle Eberhardt is another type of desert woman entirely.)

If I’d travelled dressed as a man!

The land and I are one; one with the land.

Does the body answer to the soul?

That hero is long dead, but I’ve read the book.

Not sure I fully understand about soul, but bliss, I do.

I would not convert to Islam.

I do not have six languages at the tip of my tongue.

Refuse to go back to your civilization.

Is this confusion or wisdom, Dad?

This good horse, these camels.

Her life now, as I read it, is finished, closed. But her life as she wrote it is unfinished.

Let me have my unfinished life.

Where are the Bedouin boys?

The blind therapist creates a gaze through modulation of voice . Without the distraction of sight, he tends not to be deceived.

His theory of truth: that it’s layered. He has a range of stylized sounds that act as his eyes and offer solace or neutrality.

Parker Williams, a boy in the ring.
I’ve caught a live bird in the hand.

Have you ever been to the Sahara? Walked a desert? Ridden a camel? Known anyone who’s worn a veil, died old, still a virgin?

Are these the wrong kinds of questions to be asking?

What is a genius?

Rosa hides her smile behind her hand, unnecessarily.

She sees orange and red, the greens and yellows of fall harvest pumpkins: something from her childhood, intruding.

Her doctor can’t see. Does that mean he has no brilliance?

–Where are you now?

Like a window, he always knows when to ask.

Rosa wishes she were a doorman, but without having to open and close.

She wants to travel across the desert on a camel.

Her father could come and retrieve her, if he dared.

Her mother and brother would stay home, banned.

She shifts in her chair, pretzels her legs beneath her.

She covets the bull’s-eye of genius but would be satisfied to look behind the doctor’s eyes, to see what he sees.

Would she trade her allegiance to the idea of Gertrude Bell for the talents of a Macedonian firewalker? Will she ever lose her virginity? (Is it negotiable?)

She has a friend who eats only white things.

She is unpoked, buttoned-up, all-one. A miserable donut (no hole). Without being punctured, how can she know her center?

When certain cars pass in the street, he is forced to lean in toward the patient and focus more intently to catch what is being said.

He is all ears.
The pores of the walls open, listening.

The layers of sound divide—he zeroes in on the layer that speaks to his heart: endless longing.

He leans forward, retreats, collects the room’s sounds in a basket in his head. The sounds run through, leave gold.

The child is running against time, her legs are tied to the moon’s shadow.

Someone presses hard on a horn. It floods the room.

She dreams she sees him on the street, walking quickly, with a stick.

She runs and catches him just as he turns into his building: Hi!
He knows her voice, turns toward it.

She leans toward his face, finds his hands on her eyes.

She fills his cups with tears.

Anne Germanacos' novel, Tribute, will be published by Rescue Press in 2014. Her collection of short stories, In the Time of the Girls, was published by BOA Editions. She and her husband live in San Francisco and on Crete. Read more at her website, www.annegermanacos.com 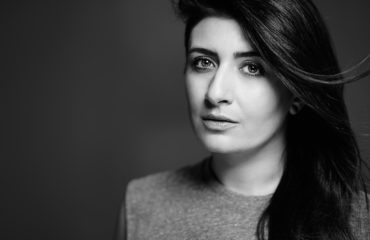 THE LUCKY ONES by Hananah Zaheer