LETTER TO PHIL FROM MANITOU SPRINGS by George Kalamaras

Did Darwin name the world, or did you, Phil, in creating him for us?  I swear a Galápagos tortoise inhabits my sleep.  A dream broth.  A cup of Genmaicha tea containing roasted grains of brown rice.  It lays its eggs across the coral reef of my brain.  Blonde.  Blind.  Without fish-mouth or salt.  The three readings for the day from the Church of Francis Ponge would most certainly be “The Oyster,” “The Mollusk,” and “Abode of the Gray Shrimp.”  What am I looking for here in Manitou? Surely not a man.  Or two.  More like the primordial pulse of the manta ray let loose through the fossils of an ancient mountain pass.  Imagine the ragged shore of the Baltic Sea and a big black wolf in 1835 that we believed was the other side of the world.  Imagine Apollo, patron of shepherds, associated with wolves—though only out of fear of certain parts of ourselves that might never die.  We kill hundreds of thousands of breaths, regularly, when we breathe mindlessly, without focus.  A shaman in Siberia shakes his maraca, reaching into me, and holds my liver right there in a basket before me, telling how to track my past.  How my mouth might finally be the beautiful, brutal slaughter of 4,000 geese in the spring hunt off Cape Krestovskaya.  Your poems are more beautiful than the Crimean dead, than the Japanese glaze of a soap dish waiting to cleanse my mouth in the Manitou Crafts Co-op.  I still remember your class.  1978.  How Jennifer and I noticed the sweet peculiarity of your blue suede shoes.  Did they evolve from the bellowing blast of yak leather?  From the low vocabulary in the underbelly of an ox?  How many people know that the musk ox is more closely related to the North American mountain goat than to the bison?  How much chocolate can one possibly eat in this tranquil tourist town of Manitou without vomiting a goldfish, forcibly, all the way down from the watery restlessness of the brain?  I keep returning to Stevens because I don’t understand, though I love the sound of his verbs.  Come.  Go.  Stay.  Be well, he seems to say.  Even when sounding like the rarely glimpsed freshwater mountain shrimp of Borneo.  Once, when writing about Vallejo, I quoted Stevens by mistake, saying, the ordinary of his commonplace.  Once, writing you, I asked if you were a mirror of the purest milk, my most moist lice, or just my mouth, thirty years older than the rest of me.

George Kalamaras served a Poet Laureate of Indiana (2014-2016) and is the author of fifteen books of poetry, eight of which are full-length, including Kingdom of Throat-Stuck Luck, winner of the Elixir Press Poetry Prize (2011), and The Theory and Function of Mangoes, winner of the Four Way Books Intro Series (2000). He is Professor of English at Indiana University-Purdue University Fort Wayne, where he has taught since 1990.

THE CITY IS A BODY BROKEN by Natalie Scenters-Zapico 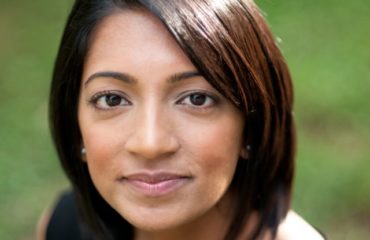