Anjanette Delgado is a Puerto Rican writer and journalist. She is the author of The Heartbreak Pill (Simon and Schuster, 2008), 2009 winner of the Latino International Book Award, and of The Clairvoyant of Calle Ocho (Kensington Publishing & Penguin Random House, 2014). Her work has appeared in numerous anthologies, as well as in The Kenyon Review, Pleiades, Vogue, The New York Times (“Modern Love”), The Hong Kong Review, NPR, and HBO, among others. A Bread Loaf Conference alumni, she won an Emmy Award for feature writing in 1994, served as a judge for the Flannery O’Connor Short Fiction Award in 2015, and was a Peter Taylor Fellow in Fiction in 2016. Her short story “Lucky” was nominated for a 2020 Pushcart Prize, she holds an MFA in Creative Writing from Florida International University, and lives in Miami, Florida. 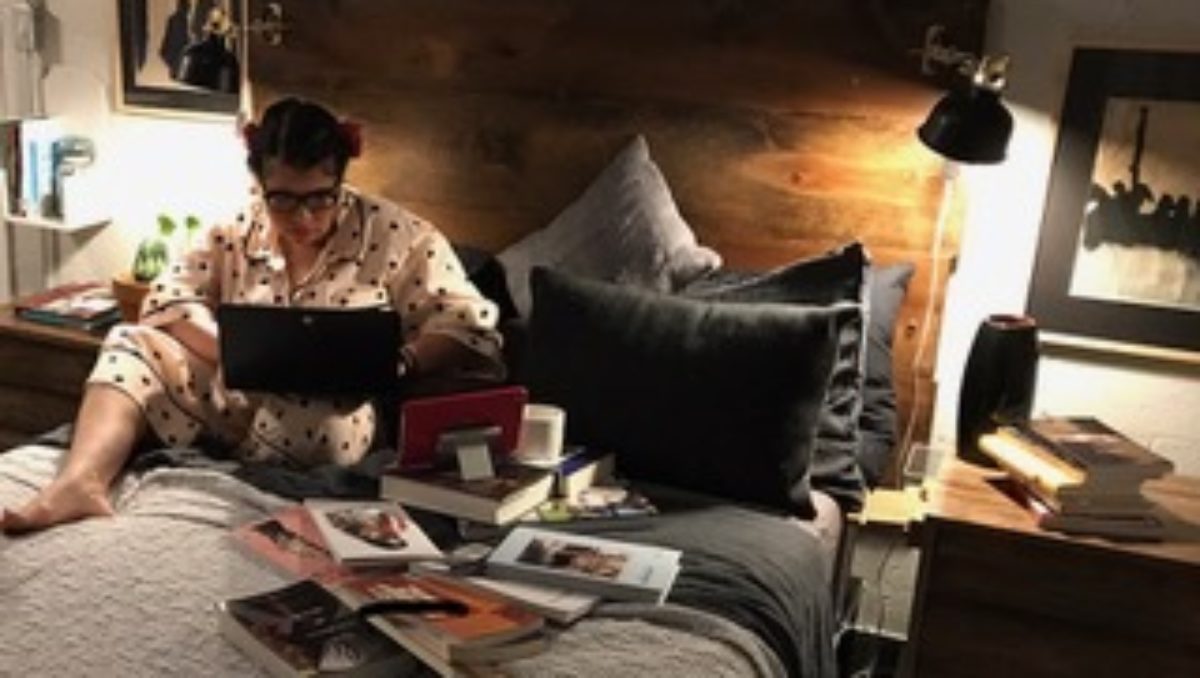 Looking to carve out some time for writing, find new ideas, or learn new ways your writing can respond to injustice? Watch and follow along with this recording of our October 15th Four Way Writes generative writing session with Anjanette Delgado:

Writing Protest: How to Use the Language of Truth-Telling, Protest, Anger, and Denunciation in Your Writing with Anjanette Delgado

In this session, we will practice excavating our truths, honing in on those things only we can say. We will also practice letting loose and holding back, and see for ourselves how restraint can be an angry writer’s best tool. 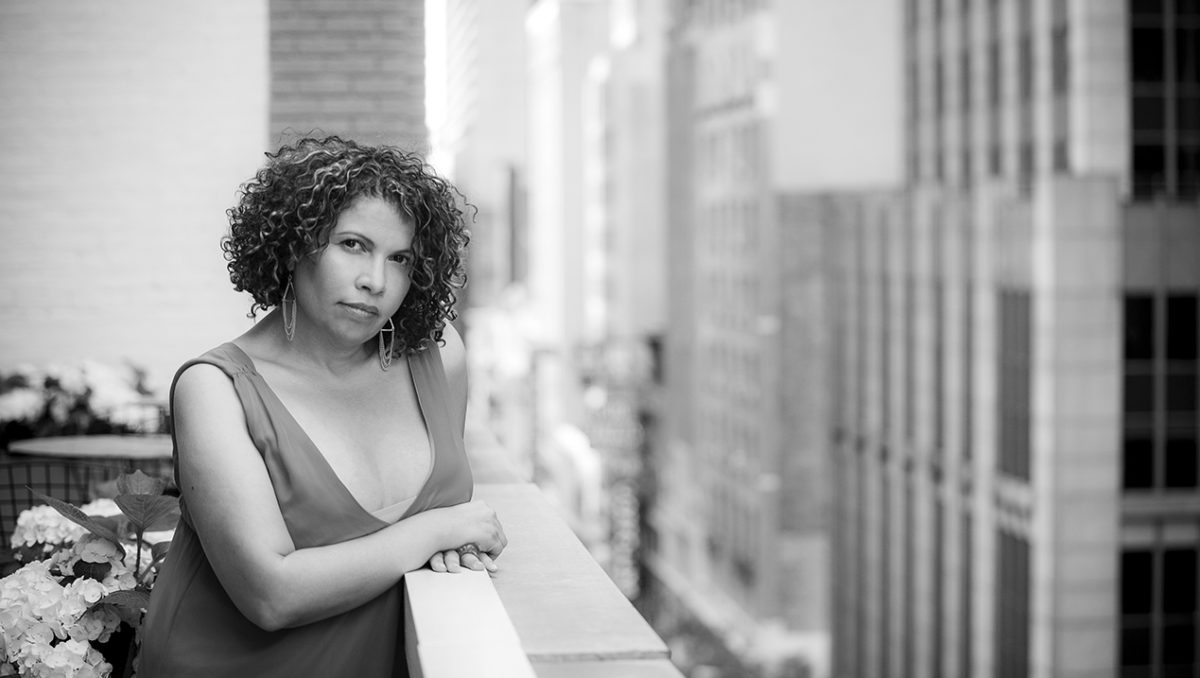 The summer I became a bird —the very week, in fact— the meatpacking warehouse across the street turned into a dance club.
At first, it was called “The Killing Room” and then, tall walls repainted to a sky blue, “Cielo.” I’d heard someone say that it had no ceiling, only skylights, and the idea of such a large space unprotected from night, gaping, open to sky whims and acts of weather, scared me.
Weeks later,  when they hired a crow for a bouncer, I took it as a sign I’d never be a woman again. Maybe had never really been one. He was dark, of course. Black hair, black sunglasses, black t-shirt, pants and boots. Sometimes he wore a black jacket that glittered against the club’s light walls. He had a serious stance, a dignified attitude, and when I saw how seldom he smiled at the sparrow girls who strove to catch his eye, a part of me wondered if I even wanted to be turned back into a woman.
Before him, those first few weeks as a bird, I’d thought obsessively of skin, of limbs, possibly lost forever. I perched for hours at a time on the fire escape of the little West 12th Street flat that still belonged to the woman I’d been, unable to remember what I’d done to become this nervous little beast whose feathers shook in still air.
Now I thought only about keeping my tarsus straight while wrapping the hind toes of my feet firmly around the railing as the beats from the club raged on, for the first time, wanting to fly.
But I couldn’t. A sudden bird with a woman’s inherited fear of flying, I was still an outsider among the winged, watching other birds come and go, longing to be seen by the pigeons and blue jays, the rock doves and swallows, yet unable to connect. Some things had not changed.

As a woman, I’d been a normal girl working in an anomaly: a literary magazine with a wealthy owner and plenty of money. Our offices were on Broome Street back when Soho was considered a gritty place with real soul and I’d walk to work regardless of season, only stopping for coffee, convinced I was Mary Tyler Moore living a career girl’s dream, tossing my cap into the sky of a real city: tall, dark, mysterious, full of possibility.
I’d read and write and type my summaries, carefully writing the page and line numbers of passages I wanted the head fiction editor to notice on the margins of my reviews. I skipped lunch, left work at nine, walked back to the little West 12th Street apartment, as large as the four stories-high fire escape I now live in, to play out the lonely routine of undressing down to my panties, opening a bottle of wine and sitting by the window naked, reading and drinking until I fell asleep.
Once in a while, a boy would come over. Usually, he turned out to be a man who couldn’t stay the night and, in the morning, I’d do it all again.
All through winter and into spring, I’d known parts of me were disappearing, hollows being created inside a body needing less food with every passing day. Then summer arrived with skies the color of brushed steel (a sign I should have seen) and my skin turned sallow and dry and developed an ink-tinged translucence. I told myself it was just summer desiccating everything. But it wasn’t just that. The nightly wine glass became a craving for (stronger!) amber-colored puddles and I became that woman always longing to wet her beak in other people’s spirits. I was exhausted from surviving, afraid of getting out of bed, and lost so much weight; my arms like tired wings, drooped alongside my too-small body until my disease, surely already visible to everyone else, revealed itself to me.
When I didn’t make it in to the office at all, I was fired over the phone. I felt relief. Slight breezes had been tipping me over for months. Curt nods had sent me to hide in the women’s bathroom, crying uncontrollably, unable to care who heard me.
This was good, I thought. Things would change now. Maybe, during the day, I could peck morosely at translation work an editor-lover from my human days still scattered my way. At night, under a purple-gray ashtray of a sky, I could perch on metal and listen to the hip hop that spilled into the air each time the big blue metal club door swung open.
And when the door was closed, I could watch the crow hold court on the sidewalk, deciding who could enter and who would stay outside longer or forever, which I did, watching him for hours on end, day after day, reading him like a story, filling in the  gaps with what was missing, and believing everything I added was the truth.
How much in common we had; how lonely we both were; how confused we’d been upon arriving in New York, the soot and smog making us feel small. He needed me, this bird that I’d become. I could save him. He was mine; had even taken to making signals and noises in my direction whenever the line thinned and there were more people coming out than going into the club. It was a sign and it isn’t wrong to believe in signs if you find yourself a bird without a soul in New York and signs are all you have.

Soon after, on a windy night, I heard the rustle of feathers, crisp and loud. A couple of sparrows were cat-walking past the line of geese, ducks, and the occasional early hen toward the club’s entrance.
“Hey, Aldo baby. This is my friend Annika,” one of them cooed, her wings lined in gold and tinsel, their leading edges sequined. She had a bright red, bow-shaped beak that I could see clearly from my post. Annika, wore tight pink Lycra pants and high heels and walked like a pelican.
Aldo. I savored his name, chirping with excitement at the discovery, relaxing my grip around the chipped metal fire escape railing. Aldo. A bird, lost like me, my find to love.
Then the wind shook cold, blowing me off my perch hard onto the windowsill. I searched for my crow. There he was. Smiling. Taking a good long look at the birds, as if he could decide their worth with his eyes. They were smiling too, coming closer to him, and I chirped louder, this time to catch his attention.
The wind blew and blew and I stayed where I’d landed, unable to get back up onto the railing, my dusty brown eyes fixed on Aldo. I wanted him to forget them, to be unaffected by their beauty, to know they were nothing. Or maybe I just wanted him to hear me, to help, to show me I had not been alone those happy nights thinking I’d been found. The wind kept blowing. I let myself lay against the concrete of the window ledge and closed my eyes.

When I was a woman, I wanted my men-crows to read poetry and have the ambition to become something, chefs, paramedics, street poets. Now all I wanted was for this bouncer to climb my rail along with the sun, his sharp black eyes up close and trained on my face. I pictured the muscles of his barrel chest under the black feathers that peeked out from the neck of his black t-shirt, strong and weighty and vibrating, and longed to be someone lying still beneath him. “What happened to you?” I hoped he’d ask, looking at me as intently as he’d looked at those birds on the sidewalk while I waited.
A new wind cut through the block making spurs jangle, sequins chime, and me open my eyes as I shook and almost fell through the rusty red slats of the fire escape, and, still, I looked for Aldo. Aldo taking off his sunglasses and ushering the birds into the club as they cackled excitedly, the door shutting behind them.
When he assumed his post under the glare of the lampposts, forgetting to do so much as look up, search for me, I knew he was no crow, his skin, like mine, a translucent brownish gray with dull and matted feathers, nothing black or shiny about him. He would never feed anyone as a chef, nor save a person’s life by reading a poem on a sidewalk. It would not occur to him to come up a fire escape with the first sun. I was still alone, needing to find my own way back onto the railing, desperate as I suddenly was for a puddle of amber to drink from.