…in heaven it is always Autumn
—John Donne, Christmas Sermon, 1624

By sunset, the crickets’ trilling begins
in the airless damp, rich with salt
and the sulfurous fumes the Gulf flags off.
Bristling cattails brush my hands.
The light-crested water rises and falls
like a chest flecked with blonde hairs.
I feel estranged from You.
A shoal of minnows breaks, silvering
my ankles, like a mirror; my heart swims
in gladness at the changeable world.
Tell me in heaven it’s warm enough to wade
into this fine transparence, never want for air,
only light and water, and be as the river
flowing into the sea which gives up its name.

We leave the jewels and daggers, a long wool rug
whose dyes have deepened to rust—
you don’t notice. Near the exit, two guards chat
about the spill. A sea-blue bowl
dazzles me, its craquelure like arteries, blue ink
where blood would be. No one
knows the name of the woman in the porcelain,
offering a man sweet cakes.
Could she be Scheherazade, each night always the first,
cushions unchanged, pastries never stale?
They’ve been buried centuries, no one to complete the story.

Is it still that dark underwater, the guards ask?
You tell them of the dead zones, cloudy-
eyed fish covered in sores and scars; of fishermen,
their nets slack with fewer crawfish and oysters.

I come when you call, swept away from the bowl,
full of unfulfillment, and down terraced steps.
In the park by the riverwalk, children dodge jets of water,
their joyful noise sharp as crystals.
The brown Hillsborough River flows into the bay
and circles the dozens of spoil islands.

Tonight, our thousand and second night,
tell me the story of our laughter
through sudden summer rain.

Tell me the story of salt: on your shoulder,
chest, and chin. Tell me how that first week
we seemed to know our pasts by heart,

where we’d been and where we planned to go.
Tell me the story of how we woke up wet
in each other’s arms and watched the Gulf

widen into deep water where, beyond our vision,
an explosion claimed eleven workers,
smoke billowing skyward, a dark reflection

of the darkness below. Who’s to blame?
Who knew what? We can’t keep any story straight.

Somewhere the Gulf still rolls brightly ashore—
after oily booms were hauled in,
dispersants and matted wings, “Closed for Business”
and wringing hands, and thousands
of small fish, pale as plaster dust. On that shore
crabs shuffle out at night and mate.

We watch gulls float down the old river, vanishing
under a bridge. Plastic bottles idle
in bilge, until an unseen current carries them away—
the way we’ll part.
Across the river
the university gleams, its confection of bricks and minarets
like gingerbread with icing dusted silver.
Perhaps, Scheherazade’s bowl—its story inked into bone
and china clay—would fill for us with wine.
We would trade it between our lips and see the picture
rise with every sip while our faces warm
and you tell me the story in which I mistake you for the story.

Derrick Austin is the author of Trouble the Water, selected by Mary Szybist for the 2015 A Poulin Jr Prize (BOA Editions, Spring 2016). A Cave Canem fellow, he earned his MFA from the University of Michigan. His work has appeared in Best American Poetry 2015, Image: A Journal of Arts and Religion, New England Review, Callaloo, Crab Orchard Review, The Paris-American, Memorious, and other journals and anthologies. He is the Social Media Coordinator for The Offing. 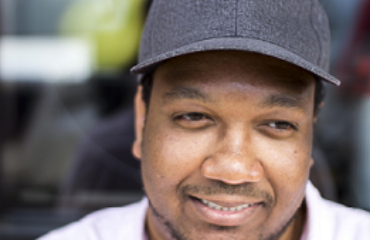 FIRE AND JEWEL by Sydney Lea