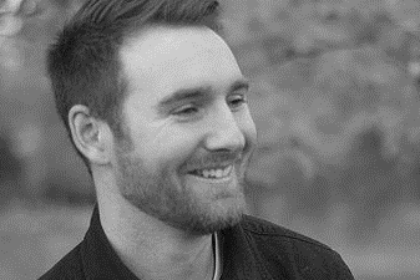 This blue-green robin’s egg
cracked, now, and left
in the porch nest—impossibly
light in my palm. Somehow
the chick knew to press its beak
against the egg’s surrounding walls.
In darkness, it must have followed
sound—the thunder clap,
its mother’s song, the dog—each
driving its first and final fissure
of the shell. But how did it trust
that leaving one world would,
in fact, reveal another? I listen
to the wind and hear
only wind.

Keith Leonard is the author of the poetry collection Ramshackle Ode (Houghton Mifflin Harcourt, 2016). He is also the author of a chapbook, Still, the Shore (YesYes Books, 2013). His poems have recently appeared in the Academy of American Poets Poem-A-Day Program, Horsethief, and Copper Nickel. Keith has received fellowships from the Bread Loaf Writers' Conference, the Sewanee Writers' Conference, and Indiana University, where he earned an MFA. He lives in Columbus, Ohio.

LAMENT FOR SOME OTHER SAIGON by Sarah Audsley