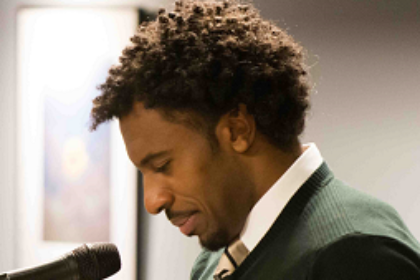 in forty years of foreign meddling,

means it when she wishes for world peace—

the pageantry—       pinup smiles and stiff,

—will not beckon peace.   Salvation

all our parched frescos or pocked statues

depicting one or another stoic god,

signaling for peace like a captain calling a play.

if peace is too transparent a trick

the beautiful game, to execute levity

with their feet. Under Hussein’s boot,

losses on the pitch often translated

spent begging deliverance from within

Mr. Uday, was the face

before he would become the ace of hearts

in the most-wanted card decks

coalition troops carried in their fatigues.

“despite having a thick beard

part of his nose and upper lip.”

Ms. Qasim will wear the red,

and the U-23 team will play

for Olympic glory, despite the death

threats that may bloom into dying.

beauty—its saturation in this world,

its disregard for the vacuums

men slaughter each other to create.

THE ECONOMY OF SWALLOWED KNIVES

I warn an auditorium full of children,
Do not try this at home. Then I begin
ingesting skewers. Unintentionally,
I enlist their youthful volition
into the war against waiting to grow up.

On the drive home, they pelt their parents
with salvos of Can I and Please, while fathers
being fathers, retort, When you’re grown,
paying your own bills for your own roof,
you’ll be free to live as foolhardily as your heart
desires. There: the moment of escalation—

suddenly their every waking hour becomes
a struggle to buy back their right to self-
destruction. Lemonade stands and lawn
mowing. Frozen meat pucks flipped
under sallowed arches, endless refolding
of denim. The children sprout acne and fuzz
as their piggy banks pudge. Their minds
have long since forgotten the death-defying
blade sleight that followed my disclaimer
years ago.

They are teenagers. Everywhere
something else shouts This could kill you,
and, achingly, they answer Yes. They can
taste it: tattoos, cigarettes and sex—
any form of flirting with mortality.
Beneath youth’s aegis, they believe
themselves mighty, no matter how poor,
but soon enough they are adults renting
efficiencies and driving jalopies—stretching
dimes for the privilege of being grown.

See how this economy needed no help
in tailoring their malaise. What next?
Heat assignments for the middle-class
scramble to obfuscate death.
Then kids of their own. Then the rest. 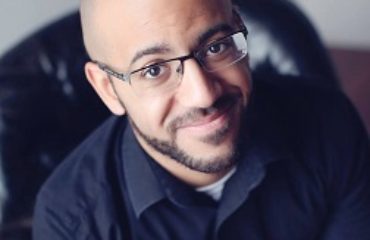