The first time with Dean, I was on a couch and he knelt beside me on the floor. He parted my lips with two fingers and slid them into my mouth. Something moved inside, a snake in a basket. He ran his fingers along the edges of my teeth and pushed them open. His fingers were salty. It was unpleasant.

He pushed my teeth father apart, inserting a third finger. I wanted to laugh. In and out the fingers slid. I closed my mouth. He pushed my teeth open. He was a swimmer. When we kissed, he kept his fingers in my mouth and pinned my hands over my head.

He had a girlfriend, and I was with another man. I didn’t understand how if you liked the sex you wouldn’t always want to keep doing it. He was an architect. He said when we met I had acted superior. I didn’t remember.

The first time he drew me across his lap, light streamed into the room. I said, “There’s fat on my ass.” He said, “I like the fat on your ass.” He would make me come, and then he would come and afterward drape his limbs around me as we breathed. I would slide my hand along his backbone, counting the ridges. When he withdrew from me, I would slip his penis between my fingers, one at a time. There were scars on his hands he said were from playing with a compass as a kid. He said, “I like hurting you.” I took him to a posh store and egged him to buy an expensive shirt he wore until the collar and cuffs frayed.

Occasionally I would call him, and he would tell me to come over, or he would call me, and I would agree to go. Before the meeting, I would sit in the sauna at the gym, imagining the night ahead, wearing perfume, a dress, heels. I wasn’t worried about what he would do, only that I might not enjoy it enough. Most of the time, we had sex by chance. I would become aroused by seeing him. I would wait for him to speak, and when he did I would wait for him to ask me to do something. If he didn’t, I would pretend to myself we were done. Sometimes in the middle of a scene, I would be indifferent to his pressure, and he would accept it. Sometimes, he said he felt close, and I could see from his perspective it seemed I had given him something. I felt a little false in that understanding, but I didn’t correct it and I did not arrive at a point of wanting it to end.

The dog smelled and was ugly, a Yorkshire terrier with two snaggle teeth and the baleful underbite of a deep water fish. It had a breathing disorder and hacked loudly until it was picked up and slung over a shoulder like a colicky baby or the pig in Alice in Wonderland. The owner of the dog was dying, and Rachel took it home. Rachel was lonely, and after a week she forgot the dog’s smell and ugliness. If you said the dog smelled, she said she had bought special shampoo and you must be imagining it. She styled the dog’s hair in a spiky variation of her own and carried it everywhere in a tote bag. In time her friend Paul said he could not bear another word about the dog. He didn’t want it thrust at him when he visited nor dragged to his apartment when Rachel went there for dinner. Their relationship ended.

The dog outlasted other attachments. By the time it was 14, it was deaf and almost blind, and it had developed thick cataracts that made it look like a small, crazy-haired zombie dog. The hacking was incessant. Still, Rachel was stricken at the thought of losing her companion, and I realized I would never understand her attraction to the most hapless and stricken creatures that came her way, although I might be counted among them. I moved in with her after construction outside my apartment made it impossible to live there. At this point, the dog was listless and uninterested in food. In the course of a week, Rachel visited the vet three times, and again, frantic, she placed the Yorkie in the basket of her bike and pedaled from the West Village to 34th Street. When she returned, she didn’t see any responsiveness in her pet. She called out to me, and I went to the back room. Rachel said, “Look at Pepper. I’m afraid to.” My friend looked shrunken, huddled against the closet door. I opened the blanket that smelled of the dog and saw a motionless rag. Pepper was dead, and as I announced this to Rachel, she collapsed in my arms and sobbed. The dog’s legs were stiff. Its tongue was hanging loose, and I had the hardest time not laughing.

On our way to a café, I said to Richard, “You love me.” He said, “Not as much as you think I do.” I was silent as we neared a grove of palms, and shadows crossed the path. I said, “I wish you would take that back.” He said, “What?” His hair was spiking up and catching the falling light. I repeated what he had said, and he said, “I don’t know how you can take back something like that.” I said, “It hurt my feelings and I would like you to say you didn’t mean it, even if you did.” He said, “I was joking. It was a joke. I don’t know how much you think I love you. How could I know something like that?” But I thought he did know. On our return from the café, he said, “I’m sorry I said that. I don’t know why I did.” I said, “Thank-you,” and the world grew a little flatter, duller.

Where are you? I need to tell you something. It’s very important. Call me as soon as you get this message. I want to give you money. As soon as I get out of here I will. But that’s not what I want to tell you. I’m afraid I’ll forget. They talk about neural pathways. What are neural pathways? They say I can relearn things. I don’t know what I used to know. How could I know something like that? Are you in this country?

I was in the backyard, trimming the mulberry bush, and as I leaned over, two starlings pecked my butt. I shouted, “Stop it.” What did they want? It was my garden, my bush. At the time, I was living with a man who disparaged my mind. He had disparaged my mind when we married, and maybe that was why he had proposed. Why I said yes is a question I am pondering. I don’t mind my father’s decline. The ill temper has fallen out of him. He did not recover from exile, and you cannot trust a person in a state of deprivation. We used to be afraid to cross him. Now we slide him around the chess board. My mother knows a foolproof form of murder. You place a bowl of dry ice in the room of a sleeping person. The dry ice sucks out the oxygen from the air, and no one can determine the cause of death. In the backyard, as I looked closer at the bush, I saw baby birds in a nest. The starlings were a mother and father, and I realized it was not my garden and not my bush. I felt I could let go of my house. I could leave my husband.

Laurie Stone is author of three books of fiction and nonfiction. Her work has appeared in Open City, Anderbo, Creative Nonfiction, Threepenny Review, Memorious, and The Los Angeles Review. In 2005, she participated in "Novel: An Installation," writing a book and living in a house designed by architects Salazar/Davis in Flux Factory's gallery space. She is currently writing songs with composer Gordon Beeferman and completing a collection, The Love of Strangers, Micro, Flash, and Short Fiction. 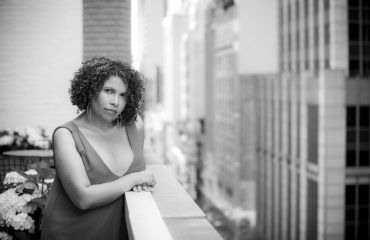