Rajiv Mohabir is the author of The Cowherd’s Son (Tupelo Press 2017, winner of the 2015 Kundiman Prize; Eric Hoffer Honorable Mention 2018) and The Taxidermist’s Cut (Four Way Books 2016, winner of the Four Way Books Intro to Poetry Prize, Finalist for the Lambda Literary Award for Gay Poetry in 2017), and translator of I Even Regret Night: Holi Songs of Demerara (1916) (Kaya Press 2019) which received a PEN/Heim Translation Fund Grant Award and the 2020 Harold Morton Landon Translation Award from the American Academy of Poets. His memoir received the 2019 Reckless Books’ New Immigrant Writing Prize and is forthcoming 2021. Currently he is an Assistant Professor of poetry in the MFA program at Emerson College, translations editor at Waxwing Journal and poetry editor of Asian American Literary Review. 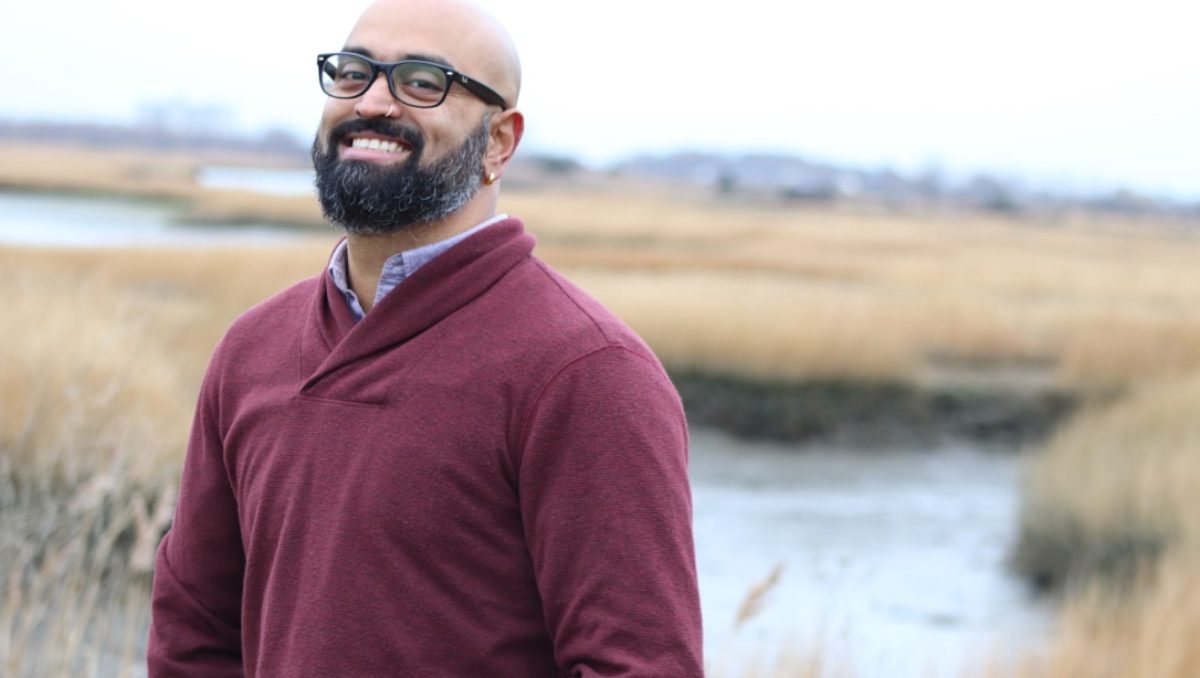 The poems that follow are from a forthcoming manuscript. These poems are a type of translation of a Caribbean chutney song called “Na Manu” by the Surnamese singer Bidjwanti Chaitoe Rekhan in the early 1960s.

The song “Na Manoo Na Manoo Re” from the 1961 Bollywood film Gunga Jamuna in which Lata Mangeshkar sings a song of similar lyrics may have been an inspiration to the Sarnami Hindustani song of Bidjwanti Chaitoe Rekhan.

Still, adding more layers and complications, is this song, remade by Babla and Kanchan– a duo from India who took Caribbean songs and remade them for worldwide distribution in the 1980s– that was very popular in my family and the community of Guyanese and Caribbean Indians that we interreacted with in Orlando, New York City, and Toronto, so my move to translate them is one that is intimate given my own linguistic history of erasure and reclamation. This is the version that I grew up dancing to, knowing it intimately in the twisting of my body in feral dance.

What is remarkable about each remake and each rebranding is the change in lyrics and instrumentation, translated each time to fit the contexts of the viewers/singers/dancers/audience. To start with the Surinamese version, the regularization in Rekhan’s lyrics allows for a predictable structure that is easily replicable, though it maintains the play and irony of the original. I keep the play and irony of the original in mind as I work through the various pieces in this section of the translation process I am presenting here.

The process that I use to translate this song I’m calling “deviant:” these are deviant translations. I want to destabilize language and the ideas around final realization and “arrival”, in order to resist stasis and provide space for all of the queer slippages of language and their worldviews in their very particular speech communities. When I was younger these songs in Hindustani would be translated into a Creole iteration with a different poetic orientation. The English interpretations were up to me. All of the poems are retranslations of retranslations of retranslations in and out of Guyanese Hindustani, Guyanese Creole, and English. In this way I envision each incarnation as a possible emanation from the text as even the idea of primacy and the original are dubious. I approach each iteration with a different idea of what I want to communicate: what affective dimension is available in the language that has similar resonances throughout while not always being literal. What are the affective hauntings of these lyrics, languages, and musics? This is the central question driving my experiment.

I’m also obsessed with Creole and Bhojpuri indeterminacies in English and the ways these languages use grief, humor, and joy in differing ways. Using Guyanese Bhojpuri, English, and Guyanese Creole, the deviant translation is nonbinary and ever migrating. (In live performances of these songs, performers sing as the spirit moves them with lexical fluidity an incarnation of their own creative magic). What results are translations that are not translations as such in that there is no resting place but rather motion with the deviant driving the multiple crossings.

I take in the raven moon’s glow
so when you deny me
I’m still opalescent.

Why veil this shine
for a liar’s night, a mind
wipe serum?

My churas are not shackles—
It’s morning and I’m gilded.

Things Not to Forget in the Morning (Liar Though You Be)

my veil with kinaras of gold

What part of me is memory?
The skin and muscle,
neuron and fat—?

Don’t believe in god.
It’s a mean lie to lay you down
to strip you of cloth and gem.

and pearls of bones
not quite machine smashed.

Did you forget? Is it beautiful
this morning where you think you are?

me na me bangle,
how de moon a shine,

O gas—
how de moon been a shine

So what thing is moonlight
who deposits amnesia

for even a woven veil
to dissolve from your memory

despite my ornaments
exquisite and golden forged

bending grass leaves
into pranam which is both

Let’s pretend you are going hunting.
You pack your gear: a buck knife, a bow
and arrows cleft from the straight weeds, wild
in my front yard. You perch in a red oak, yearning
for those chilly mornings that signal harvest.
The copper of pine needles falling; whether
you catch me or not is not the point. You look first
at the wandering deer, the bigger prize,
full of meat and bone, with a skin to cure,
but you keep an eye peeled for upland birds too,
smaller, easier to mount once ensnared. You don’t need a guide
to hollow lungs of song. Yes, I said,
birds are easy to work with, their refugee bones
hollowed for flight, so small and delicate,
they may as well not be there. I have always
made myself invisible. I mean to say
I am still—the trembling breath of a comma,
the coincidental object of your want.


Listen to Rajiv Mohabir’s reading of “Preface” below…