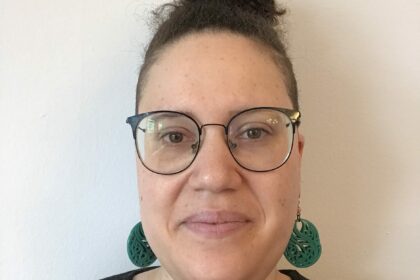 Zuihitsu at the Beginning of the End

Dark now. This is what fits, and where. Here, take what I’m offering you: a twitch of the shoulder blade. My eyes traveling the ceiling fan. A train whistle in the night. Don’t stay.

Ceaseless. Cicadas through the window, in the deep branches, punctuating the silence. For once, I don’t comfort you. A summer night that needs no definition, no light at the edge of the lake. Be here with me. Whose eyes will meet mine if you go?

Which to forgive or blame, what to forget, how. Lights off. Listen, I say, I’m the one to feel sorry for. Cat scratches at the doorway.

A thousand such nights. Generation after generation. Your hunger by itself, and of unknown origins. A halfhearted grasp in the dark. You, hunched up like a wounded animal along one side of the bed.

Between us, which is the tree and which the car wrapped around it? Moths circulating the thickness of the air. I can barely get the words out.

Dead basil in a ceramic pot near the screen, a collection of smooth stones, bottlecaps, photos of your consecrated adolescence, the unbroken spines of self-help books, secondhand shoes, tiled coasters and printed tea towels. Daily excess. A ghost in the floors. Look elsewhere when you speak to me.

Surely you hear the sirens. Someone described a relapse to me as a recurring fall, another habit to shake before you’re shaking from it. You in a t-shirt picking at your skin, striking at your face before facing it. Black night. Teeming.

A Catalog of Intentions

Who’ll name the cold settling across the storm windows,
the leaves’ tumbling exodus along the sidewalk? Half my life ago
I believed someone would save me. That year’s Judgment Day
was expected in late spring. The fact of the next morning proved
the worst was still coming. As with any barriers, mine depend
on reinforcements. Listen: I am trying to speak of intentions.

Our house is littered with abandoned projects, intentions
to wash the dishes, sweep. To uncover the sun-facing windows
daily and tend to a garden of houseplants that depend
on the ritual to survive. I can’t fault them. Not long ago
I stayed up through the night wondering if you’d finally proven
what you were capable of. I woke on the couch the next day

certain this new feeling would kill me. Every day
now I restart the work of cataloguing my intentions
to leave you. Our life is a wheel. Again and again you proved
what I always and never knew. Open the windows.
This autumn chill traveled here from far away, long ago,
to move us. When I was younger I thought I depended

on the protection others provided. In reality I depended
only on the pipe dream of safety. No one was coming. The day
we moved in together, I said We’ll be different here. That was years ago.
Tonight I’m calling you to this room to tell you my intentions.
Have you seen how the light gets reflected in the windows?
My mouth is dry and open and closed. I think I’ve proven

my point: no god would allow you to happen. It’s been proven
a hundred ways, written as though our lives depended
on it. With the right words I can turn the walls to windows
and doors again. The opposite of Judgment Day
is Genesis, the day when I enter the world with intention.
So what if it won’t be the first time. Months ago

I made a plan as I was told to, but never used it. Days ago
the last herbs in the garden froze. I expected you to prove
me wrong before now, but you couldn’t. I wrote out my intentions
then: to disappear before you found me, to stop depending
on others. I was young and thought I wouldn’t see this day.
A sign of youth is seeing permanence reflected in the windows.

No matter how long ago, the intentions survive. For years
I loved a closed window I could see through but couldn’t prove
existed. Any day now I’ll stop depending on your eyes for the world.

Meredith Nnoka is a Chicago-based writer, educator, and prison abolitionist. For the past two years she has been the Envisioning Justice Fellow at Illinois Humanities. She has a B.A. from Smith College and an M.A. from the University of Wisconsin-Madison, both in Africana studies. Her work has appeared in The Massachusetts Review, HEArt Online, The Collapsar, and elsewhere. Her poem “Prelude to Your Leaving” received a 2017 Best of the Net nomination. Her first chapbook, A Hunger Called Music: A Verse History of Black Music, won C&R Press’s 2016 Winter Soup Bowl Competition. 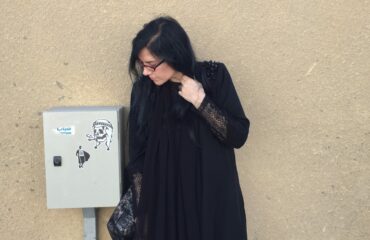 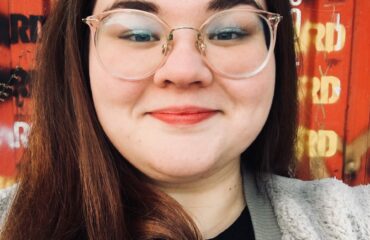 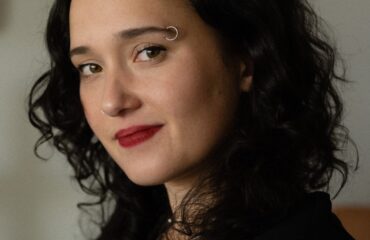 ROAD TO BYBLOS by Madeleine Cravens