Things That Fold by Karisma Price

I learn the facts about what we’ve lost:

You’d find their age in the Bible or Quran, old as Oil
Palm, Fan Palm, or Windmill Palm:

I learn these descendants of a common line.

was a palm beside a stream, but what if the men
who poison rivers are always the last to drink?

Yellowed fronds mean too much rain.

It’s hard to start over after a great change,

but if they’re not cut for tables or sold as seeds,
palms can outlive a home. And I’m so tired

of Midwesterners in boat shoes

from their Puritanical woods that expire
in annual gray. Because people who reside

in paradise deserve to suffer sometimes—

oh, but they’ll vacation here! It’s unnatural for you to live

I learn the five hands of palmistry.

My hand is a Wood Hand, its knuckles thick

and fingers long, my mind stubborn and heart
often wrong. What scares me most is the idea

of deep time, or everwhen—which is a breath

away from evergreen—though not at all the same.

The Earth remembers our sins, for time is not
a tree trunk pushing forward but the wheel

within that churns and scars,

like how when I was thirteen the junior high

librarian stopped me in the hallway and insisted,
But your family was in the basement once the tornado hit

your house, and I had to shake my head, no.

How teens drove to my neighborhood, parked

next to the Red Cross. They wanted to see roots
gutted from soil, brick chimney that smashed a car.

They brought popcorn for themselves.

And I’m not easy to move to tears, but still I cried

for the maples and oaks that fell in my backyard.
What I mean is, trees take the wind

in a garden on Mauritius there grows

It’s enclosed in a box of metal wire,

with broken palms. I learn flowers once glowed
on this last palm in the colors of white

and cream. Humans tried to intervene.

It hasn’t bloomed in years.

I ALWAYS WANTED TO SAVE THE RAINFOREST

but now I live in a rainforest

and the thing I can’t save
is me. Let’s get to that later on.

A rainforest should be studied
in fours: emergent layer, canopy,

which speak to the uterus—or something
along those lines. I try to write

it down as fast as my hand can move.
An osprey flies above me with a fish

caught in its talons. The fish still looks
me in the eye. What is it they say

about a bird of prey overhead?
I’m afraid to Google my fortune.

I know I sound paranoid, but the rainforest
is a cutthroat environment.

One must innovate
in order to survive. They tell me

nine vials of blood is less
than it seems, but if my bad

numbers are from stress, I plan
to sue Paul Ryan for damages.

cervix is polarizing, and no one wants
to hear about your pelvic floor,

complex though it may be.
What is it they say about women

and our bodies? Sometimes we feel
an unconscious reflex to guard

ourselves against a world hell-
bent on taking everything away.

And sometimes when I sleep
I wake up to teeth

curling into a creature of the soil.
The forest floor is the most intricate

layer of the four. Light can’t reach
me forever. What is it they say

about sympathetic overload? I have
my students write a research paper

in which there’s a solution
for every problem. I ask them why

did I structure the assignment
this way, and they don’t know

enough about despair to answer.
I could list all those who poison

and seize, but the rainforest works
to rebalance the numbers. My God.

Do women and rainforests
have to do everything?

I don’t live in a real rainforest.
It’s just a forest that’s humid,

dark, and tropical, so dense
I could find my way inside

Anne Barngrover is the author of Brazen Creature (University of Akron Press, 2018) and Yell Hound Blues (Shipwreckt Books, 2013) and co-author with Avni Vyas of the chapbook Candy in Our Brains (CutBank, 2014). She is currently an assistant professor of English and Creative Writing at Saint Leo University and lives in Tampa, Florida. 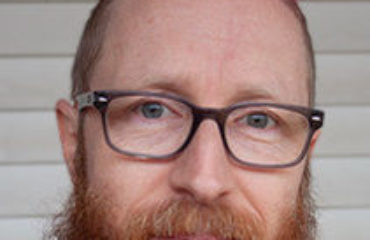 Laughter is Close by David Rivard

Things That Fold by Karisma Price

As the Fog Rolls In, Night Finds Its Footing by Luther Hughes

Too Beautiful to be Believed by April Vazquez