Our bodies are urns full of rain,
spilling during the harvest. The elders
speak of clemency. The army marches on.

We watch them across the ocean,
speak their undead name in our sleep.
Some of the sisters still make mosques

in abandoned lots. They auction their gold
for Allah’s ninety-nine names, while
the neighborhood boys hawk the spires

for cocaine. In the hour of the blizzard,
the devout speak of owls rising from
fossil. When they bathe, they hear

children’s voices in the pipes, open their
mouths wide to catch that scalding
song. Their wombs are empty now.

They name the trees in the projects for
Hagar. Snow fills the minaret and they wait
to arrive, finally, shaking, to god.

Hala Alyan is a Palestinian-American poet and clinical psychologist whose work has appeared or is forthcoming in several journals, including Third Coast, The Missouri Review and CALYX. Her first full-length poetry collection, Atrium, was published by Three Rooms Press in New York City, and was awarded the 2013 Arab American Book Award in Poetry. Her second collection, Four Cities, is forthcoming by Black Lawrence Press in 2015. She resides in Manhattan. BOY IN A FIELD by Shannon Elizabeth Hardwick 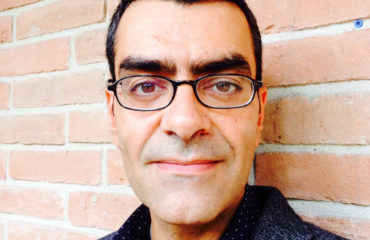