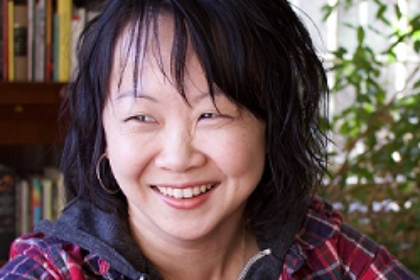 I want to be a boy, you tell the man
who analyzes you. Free of desire.

He nods, light flashing
off his thin gold spectacles.

No one called the singing boys
castrati to their face. So evirato,
meaning one unmanned,
musico: one making music.

Though not by ordinary means—
fingers pressing keyboard, lips
against a cold silver mouthpiece.
No, the singer’s body turned
to supple balsam, stretched
over the years until it forms
that frame beloved by engineers—
strength, endurance, range—

You uncross your legs, recross:
left over right. Beneath you
the vintage leather cushion sinks.

It’s the idea that they aren’t
committed yet.

until those clear, adolescent ribs
ascend like arches in a nave, not merely
the idea of being holy, no—

the blood and the meat. Only then
is the sacrifice complete.

Out the window a crane lifts;
staccato drilling.

I’m sorry,
the man says, waving—
all this construction.

It seems appropriate, you say.

Only then will the whole frame sing.
Become a building large enough
to contain the singer’s longing—
all his longing, all our own—

But no, what you told him
wasn’t true—

what you want
is to feel everything, desire
as the scarlet tape beneath
the plastic, what you want is

not the package unwrapped,
solid in your hands, but
pleasure in the pulling, gently
ripping off the plastic.

enough to let us watch him
grow transparent: liquid, dim
in the dusk as a cool glass bowl.
And who are we to question, we
who bend our ears to listen?

Violare, you tell the man
who analyzes you,

is a beautiful word
despite its meaning.

Unlike victim, unlike vulnerable.

Castration was never, strictly speaking, desirable. Or legal. But beauty made the mutilation worthwhile, vital even, since God couldn’t exactly sing to Himself. Money made it prudent. So castrati trained to sing like angels performed His masses, played the parts of both men and women—lovers, heroes, villains—in the candelabraed courts of kings and queens. Got rich like rock stars. Were beloved.

I fell in love with the castrato known only as “the boy” (“Il Ragazzo”) at first, then as Farinelli, when I fell in love with the music of his friend” Domenico Scarlatti. A late sonata, I remember, recorded on piano: needle-like precision, needle-brilliant colors in the hoop. What I can tell you is it jumped. He jumped. Off the tracks into unrelenting dirt, showing us a glimpse of his mind, that private dark plummet of the mind we hide from
ourselves, from others, every day. Then up again: into perfect sun, the remorseless summer green of trees.

You’ve been abused, he says slowly,
taking care to look into your eyes.

Mind (your mind)
jumps, a slapped animal. Blink,
twitch—
I hate that word,
you begin,

I don’t want to think of myself
as a victim. A tight smile.

Snap as the bridge
collapses, soundpost

whose only duty is
to echo (are we doomed

to echo?) every wave that
slaps it through your hungry violin—

one thing making
another sing, because there is

no music without violence,
no sound without a chain.

And when the tumbling stops?

In your hands a newly
metamorphosed box.

An endless loop, each slim sonata—split in half, a repeat at the double bar. You return to the beginning, but not näively, there’s no return without an echo of the first time. Older, sweeter sometimes, a darkening wooden cask.

No one speaks the words. Silent at the table,
four of us now, a new boy clearing dishes,
first the plates—the ones Father bought in London—
then the knives and forks. The big clock strikes ten,
still Mother doesn’t say, Carlo, time for bed.
Riccardo at the head of the table—
barely a week since Father passed away—
sitting high and black as a graveyard gate,
Sofie twisting day-old daisies in her lap.
The estate, Riccardo says. Decisions.
Mother creasing her black lace handkerchief.
A pair of bankers, he begins slowly,
Brothers. They have heard of Carlo’s talents.
The large fruit bowl remains on the table,
Father’s favorite—a pair of ladies dancing,
fingers hidden in their fluttering sleeves—
two oranges huddled inside it, mute.
They believe his debut would be brilliant.

At the origin of Narrative,
Roland Barthes writes in S/Z,
desire.

Sometimes you hear the frozen river split
and yet you step onto the ice—I ask,
When can it be done, this thing? Can it be soon?
Mother staring deep into her handkerchief,
as if there is an answer there, a stitch
she can unravel with the needle’s tip.
No one makes us plunge into the river:
we walk because there is no standing still.
Then Riccardo, O you whom I adore,
how you turned to me and, smiling, said:
Little brother, let it be as you wish.
I will call on the brothers Farinello.

Desire in the text
beneath the text—

Barthes writes about a tale by Balzac,
a castrato singer parading
as a woman, baffling
as the object of desire.
About himself.

(You can only tell
this tale through indirection.)

Rain. Rain. A few drops cling to the window,
drop without a sound to the sill. Wet wind
blowing in: it barely touches me. Please,
let no one touch me. Just this bed, this bandage
wrapped around my shattered mast like a sail,
the nightshirt I refuse to let them change.
Mother’s footsteps in the hall. Then her head
bent over like the Virgin. Prayers. A candle.
We’re sailing, I’m sure of it—I’m seasick,
gagging again and again into a basin—
a hand wipes my head with a cold wet towel.

To produce narrative, however,
desire must vary, must enter into a system
of equivalents and metonymies. . .

I am winding through a stonewalled garden.
Someone mowed the grass. The clover’s headless,
dew soaks my feet, my night shirt is too thin—
If only I can find the door I’ll find him
sitting on the bench he loved, composing,
whole again: Father in the shade of a tree.
A ritornello, son. You will sing it soon.
He lifts up the manuscript, freshly inked—
a simple tune, andante. Just a scale
branching out like a tree designed to branch,
until it doesn’t, snapped without a reason.
Silence in the cooling air. Now it’s dusk.
Father looking up at me from shadows:
Son, what are you holding in your fist?

You’re used to thinking of yourself
as strong. Sit-ups, pull-ups, runs—

discipline your muscles, rid
your body of itself.

In the mirror everything looks the same.
One lock of hair, still damp, slides down my head.
Push it back. We must be perfect, he and I,
perfectly natural, calm, and gracious.
I move my lips: he smiles back instantly,
as if he’s worried I will find him out,
crying and clinging to the post of his bed.
Everything looks the same, I whisper to him.
My voice. Nothing will happen to my voice.
He is silent. In the glassy depths of his eyes
a flash—something silver twitching—a fish?
Tiny, iridescent. Fire in the pool.

You have always wanted
to be strong—

not one who needs.

Twilight: Mother spoons honey in my tea.
Alone in my room, one window open.
You’re just a boy, she says.
Though we both know
that’s the point—this hole we’ll never speak of,
my softness like a fruit. When all the other
glass bells smash, only I will stay unbroken.
A boy. Always a boy. Il Ragazzo.

Annie Kim is the author of Into the Cyclorama, winner of the Michael Waters Poetry Prize and a 2017 Best Indie Books of the Year selection by Kirkus Reviews. Her poems have appeared in Kenyon Review, Ninth Letter, Pleiades, Mudlark, Crab Orchard Review, and elsewhere. A graduate of Warren Wilson’s MFA Program, Kim is the recipient of residencies from the Virginia Center for Creative Arts and the Hambidge Center. She serves as an editor for DMQ Review and works at the University of Virginia School of Law as the Assistant Dean for Public Service. 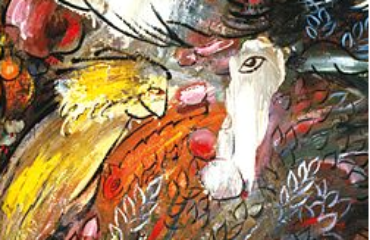 MAKE ME JUMP INTO THE AIR by Cat Richardson