Stefani Nellen’s short stories appear in Guernica, AGNI, Glimmer Train, Third Coast, the Bellevue Literary Review, PRISM International and in the Masters Review Anthology Vol. IX (selected by Richard Bass). Her fiction won the Glimmer Train Fiction Open, the Montana Prize in Fiction, and placed as runner-up for the Wabash Prize and as finalist in the Iowa Review Awards. She earned an MFA in creative writing from the Bennington Writing Seminars, and is also a graduate of the Clarion Science Fiction and Fantasy Workshop. A psychologist by training, she lives in the Netherlands with her family. She’s at work on a novel and a collection of short stories. 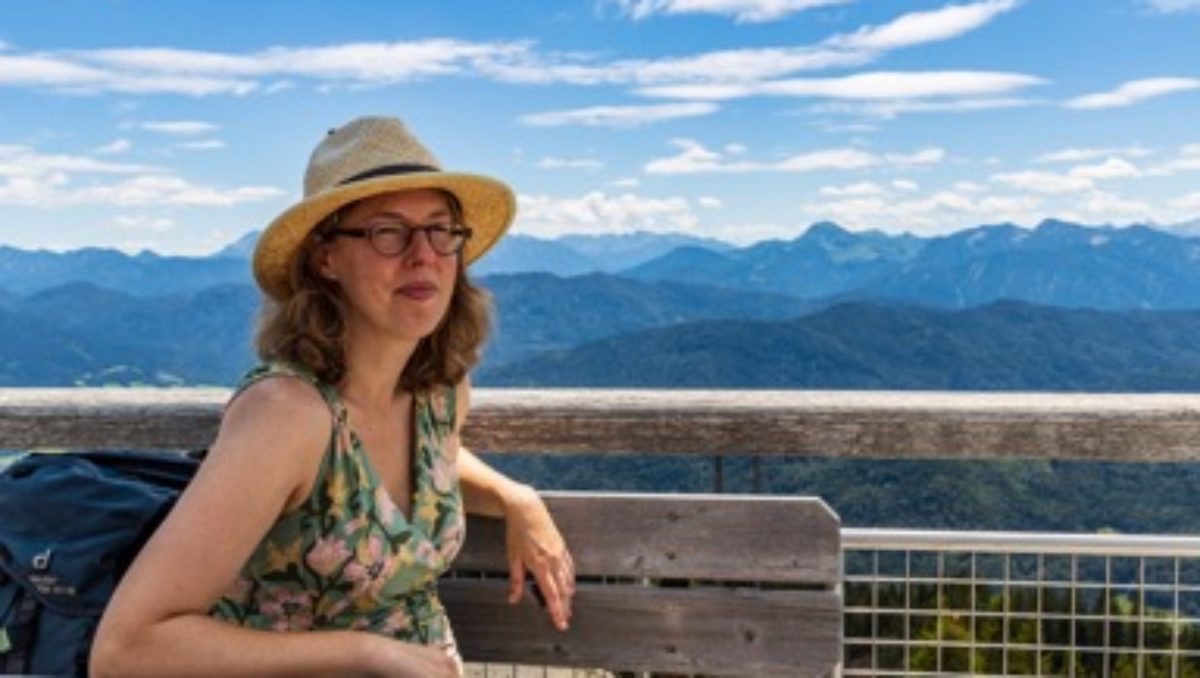 When I was still training for marathons, I tried to run a 30 km loop from Groningen to Bedum and back. I got lost and ended up in Beijum, a neighborhood built in the Seventies, with streets folding into each other like lobes of a brain. By then it was getting dark, and the skies opened up. Within seconds I was wet to the skin. More by accident than design I made it to a recreation area with artificial hills, and trails with precisely the right degree of ruggedness.

My sons have never been athletic, with their pointed faces and cunning smiles, with their saucer-eyes and coal-black hair. They looked and acted like twins, even though they were born almost two years apart, both of them born victims of the kind of boy who dominated the fake wilderness of suburban parks. My sons came home from the playground with smashed glasses and spit in their hair. Once I said to them: “Hit them back if you have to. Once is enough, if you do it right. Do you want me to show you how? Do you want me to treat you like young men, or do you want me to treat you like porcelain dolls?”

If he’d said it with the languid impertinence of puberty, I’d have been thrilled. But no, he sounded hopeful.

My husband said I was too hard on them. Every evening after work, he’d coax them into a game of soccer, as if to prove to me how strong and robust they actually were. Each of our sons’ stumbles or half-assed kicks-past-the-ball made it clear to me that they only played for his sake. They didn’t do anything without transmitting the same silent commentary: Whatever it looks like we are doing: we’re not really doing it. We only pretend.

My younger son killed himself when he was nineteen. People assume that, as the mother, it’s hardest on me. That may be so, but I worry about my oldest. He was his brother’s best friend, and despite his privileged access to the black diamond piste of the little one’s soul, he couldn’t save him. In the public eye his failure isn’t half as enormous as mine, but I fear he disagrees.

A man passed me on his bike. He was tall and thin and wore a long overcoat. A wooden box was attached to the handlebars of his bike.

He stopped very gradually, and I walked after him. It took me a long time to catch up. We stood under a yellow streetlight shaped like two eggs on top of each other. In the yellow, grainy light I saw he was Kafka, Franz, the insurance lawyer and nighttime writer specializing in gatekeepers. He stood there steadying the bike, which looked old and delicate between his long legs, and appeared to be unwilling to stop, yet forced to do so by his manners and upbringing, and embarrassed on my behalf for bringing about a situation the consequences of which I could not possibly fathom. I asked him for the quickest way to the Korrebrug, the bridge that would bring me back into the city.

“That’s not going to be easy,” he said with an apologetic smile. “Let me try to explain.” Something was scratching against the inside walls of the box. Kafka started to describe a route that would be impossible to memorize, a route past the hills and around the lake and through hidden streets, a route filled with turns you were guaranteed to miss, and even if you didn’t you would probably get lost. You really had no chance of making it. It was scandalous. Local kids stole the road signs to confuse strangers.

Kafka used one hand to draw the map in the air, but soon he shook his head and laughed. “No, no. It’s impossible to explain.”

“So it’s this way?” I said, pointing where I thought I saw the aura of city lights.

“Thanks, anyway. I’ll keep trying.” Standing still, the muscles in my legs had stiffened. Once I started running, my legs felt like fat candlesticks I had to drag along. Kafka cycled next to me, pushing the pedals each time his bike was about to topple over.

“It’s not the Korrebrug, by the way,” he said. He looked uncomfortable, as if he would have preferred to keep this fact to himself. “The bridge you’re looking for is actually called the Gerrit Król Brug. There’s a sign right next to it. It’s too heavy to steal.”

“Where do you live?”

“I could give you a ride on my bike.” A questioning screech sounded from the box, and he said, “We would need to hurry.”

He clicked his tongue. “That’s really none of your business. Hop on.”

I sat down on the back of his bike, and he started pedaling. The bike’s chain creaked, and his long, narrow back moved in the rhythm of his legs. With every turn of the pedals, my life was pulled further away from me. My house, my husband, the potato dinner waiting for me in the oven, the nights when I couldn’t sleep: all fading.

And at the same time, another strange thing happened: it was as if his bike became a machine that was slowly pumping the years of my life out of my body, emptying it of grief and motherhood and returning it to my girlhood shape.  If I looked down, I would see a girl’s legs dangling down one side of the bike, a wet skirt covering my thighs, sandals on my feet. How long could this continue? Would I change into a baby? Would Kafka place me in the box and take me home, to keep him company? Or would he keep cycling and obliterate me completely? Had he taken my younger son this way?

Kafka’s coat was thin, his body warm against my mine. I closed my eyes and saw the pointed faces of my children. The older walking the younger to his first day of school. Their flopping walk. I wrapped my arms around Kafka’s middle and held on tight. When I stuck out my tongue, I tasted the rain running down his coat.

The Korrebrug is a drawbridge across the canal. It’s open most of the time. Cars spend more time waiting for it to close than crossing it, but the arches to the left and the right of the main bridge are high enough for the ships to pass underneath, and on these arches are stairs and metal grooves for cyclists to push up their bikes. Kafka did not ask me to get off his bike, however; he biked up the bridge inside the metal groove, which should have been impossible. We gained traction. Something was sliding inside the box and made a keening sound.

For a long time, it felt as if we were almost on top of the bridge, but the distance didn’t change. Kafka kept pedaling. A cargo ship approached, low in the water, heavy with black mounds of powder. I read the letters on its side, shortened by perspective. Menorah.

I held on to Kafka as if I were his backpack, my lips sliding against his back while I talked. “I better confess,” I said. “I never read your books, except one.”

“We read The Metamorphosis in school. I love how Gregor’s sister keeps bringing him food. Human food at first, and when she understands he can’t bite and chew and digest this food the way humans can, she feeds him things an insect would like. She doesn’t berate him for having the wrong kind of mouth.”

The Menorah’s engines roared as she passed the under the bridge.  Waves slapped against the quay. The arch underneath us shook.

“I always wanted to read Letter to Father,” I said. “Nowadays, you have books called Letters to My Children. But no one reads them, except other parents.”

We made it to the top of the bridge. Kafka slowed the bike; I felt for the ground. As soon as the tips of my running shoes touched the ground, my body changed back into its present shape in my perception, the weight and memory back in every cell. I dismounted. He leaned his bike against the rail and coughed, holding on to the handlebars.  He coughed for a long time. “Sorry. I’m out of shape.”

My shoes were soaked, and my clothes stuck to me like a second skin. The black band of water was still moving in the wake of the ship.

“Look. It’s been a long day, and all I wanted was to ride home from work and watch a movie with my girlfriend. And now this happened. Get back on my bike, lady, and I’ll take you home.”

“I don’t want my life to continue.”

“Great.” Another keening crept from the box. “Well, make up your mind. You hear what I have to put up with.”

My phone rang. I carried it in a waterproof pocket at the lower back of my shirt. While I contorted my arms and torso to unzip the pocket, Kafka opened the box and whispered to the thing inside. My phone was warm. The display said HOME.

Without turning away from the box, he said, “Take the call.”

I picked up, expecting to hear my husband’s voice, but it was my older son.

I braced myself in case he told me to jump. The next ship was already coming. The captain in the lighted cabin was looking straight ahead.

“Which bridge?” he said.

“How did you end up there?”

I glanced at Kafka, who was still busy tending to the thing in the box. “Someone gave me a ride.”

My son’s voice went under, swallowed by noise. Then it plopped back up. “…want me to come get you?”

I started to feel my lips, cold and swollen. “Meet me half way. I’m tired.”

Kafka closed the lid of the box. “Have we finally decided?”

Kafka spread his arms. Once I was inside his embrace, he wrapped the coat around me. It reached down to my ankles, warm and dry and silky on the inside. I clung to his body. Before going home to my family and my failure to keep it whole, I wanted to gather strength.