John West is a journalist and technologist. His reporting and essays have appeared in the Wall Street Journal, Fast Company, Quartz, the Washington Post, and elsewhere. He lives in Boston with his partner, daughter, and cat. 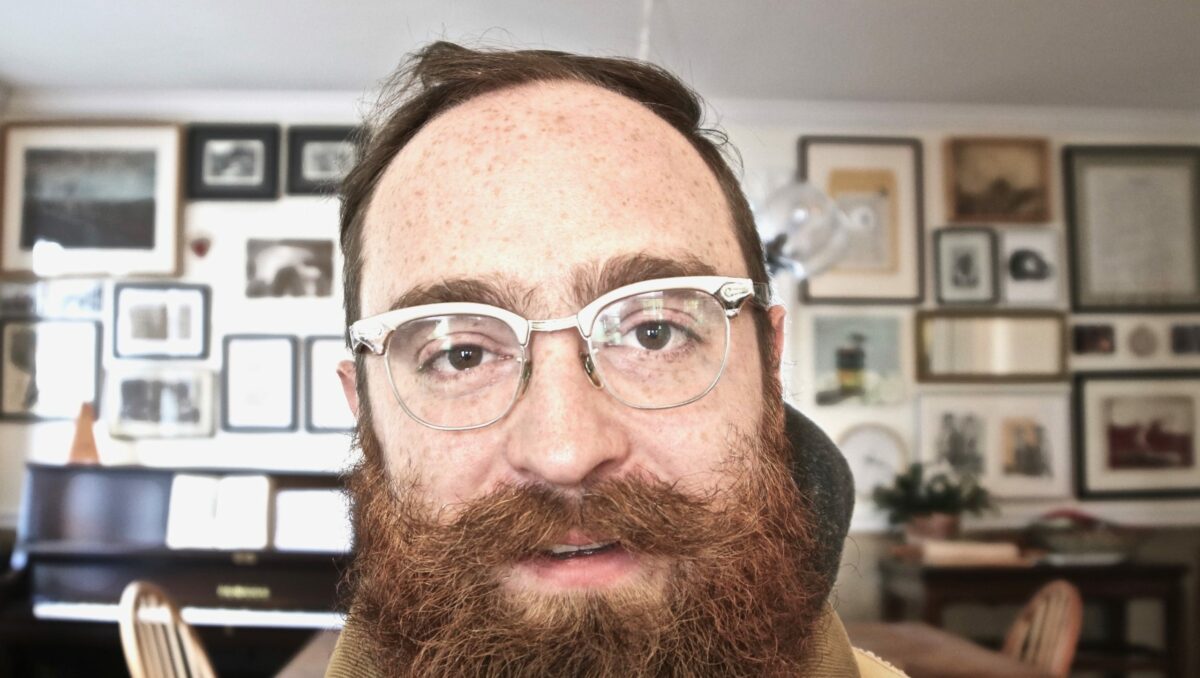 Calvin drives down to Boston to receive an experimental treatment for his bipolar disorder. He brings a weekend bag holding not nearly enough clothes and John Calvin’s Institutes of the Christian Religion. This edition is over 700 pages long, not counting endnotes and several linked indices. Calvin (our protagonist, not the theologian) sits by the ersatz fireplace in his surprisingly posh short-term rental, finds his favorite Bach cantata on his phone, and makes it half a chapter before he turns off the Bach and logs onto Twitter, where a famous journalist says she wants to kill the verb to be.

He screenshots the tweet and sends it to Kevin, his husband, back in Vermont. Accidental existentialism, he writes.

Weren’t you going to read the Institutes?

What would it even mean to kill the verb to be?

Should I be reading into this?

Calvin knows they couldn’t afford to have both taken off work—the seminary couldn’t lose them both—and he said he was fine with it, but he’s annoyed anyway, alone by a fake fireplace in a too-big city. He tries again to read the Institutes and falls asleep with it resting on his chest.

The next day, the day of his intake, Calvin busies himself in the trim galley kitchen, making eggs, using the cast iron pan Kevin let him steal away with. He pours olive oil, cracks three eggs from the dozen bought at the absurd, chichi grocery store down the street. He uses nothing but salt to flavor them. The Gospel of Matthew: You are the salt of the earth. But if salt loses its flavor, what can you salt it with? It’s good for nothing. Throw it out. Stomp on it.

The eggs just taste like eggs. He doesn’t taste the salt. He wipes the yolk from his beard and responds: Can salt actually lose its flavor?

The waiting room’s coffee table has a battered copy of the I Ching next to Zen and the Art of Motorcycle Maintenance and some book with the command “Don’t Panic” on its cover. Calvin takes a picture of the selection and texts it to Kevin.

You’re still sure I should do this?

In the doctor’s office, Calvin wants to take the leather armchair home with him. Feeling comfortable, he tells her about Calvin.

“Everyone says he’s such a bummer,” Calvin says, “but they forget that his philosophy pairs humankind’s total depravity with God’s infinite grace. Less of a downer than you’d think.” She smiles. He’ll get his first infusion of ketamine the next day. He’s not sure he wants it.

Back in the rental, Calvin tidies up.

“It was your idea, and you’ve got to do something.” A wire of exasperation runs though Kevin’s tone—a new sound, sparking coppery.

Calvin looks up from the pan he’s cleaning out, a crick developing in his neck as he raises his shoulder to his ear, holding the phone steady. “I am doing something.” He hates the whine in his voice. “I’m living it, for Christ’s sake.”

“And it hasn’t gotten any better.”

“Have a little faith.”

“Faith without works dies of loneliness,” Kevin says, paraphrasing an Epistle of James.

“Don’t quote James to me.” Calvin scrubs the cast iron the way you’re not supposed to.

“What are you afraid of?”

“I’m not afraid,” Calvin nearly shouts. “It just ought to be enough.”

“What ought to be enough?”

“Demons also have faith—and they tremble because of it.” More James.

“I have to go.” Calvin pincers the phone face down onto the counter. He doesn’t hang up, his hands somehow both greasy and soapy. Kevin says something that Calvin can’t hear.

Later, in bed, Calvin texts. That book is pseudepigrapha. James didn’t even write it.

Calvin gets out of bed and wanders the apartment, his unfamiliarity with it making his nakedness feel like a transgression. He wants to tell Kevin that he’s not scared of the treatment itself, but rather what it would mean if it succeeds. He’s underlined that part in Calvin: As our abasement is His exaltation, so also the confession of our lowliness always has His mercy near as a remedy. Who would he be without his need to be someone different?

I don’t know what I want.

In the morning, Calvin wakes to a text from Kevin: “Can faith without works save a man? Can he attain salvation by a frigid and bare knowledge of God? No, salvation comes to us by faith because it joins us to God, joins us to the body of Christ, so that we live through his spirit. There is no such thing as this dead image of faith—one without works.” That’s Calvin on James. I paraphrased a bit, but the translation’s probably garbage anyway.

Calvin feels something shift behind his sternum. He closes his eyes and remembers to breathe. I’m glad I’m not the only Calvin who thinks James is full of shit, he writes back.

Calvin rushes to the door, fumbles with the lock. Kevin holds flowers, and Calvin feels a sob rise up in his chest as he pulls him into a hug.

Kevin’s in the waiting room, the alcohol wipe is cold on Calvin’s arm, and then he can’t look at the needle. The doctor said to listen to some music, something without words, while it happens. Calvin picked his Bach cantata, with words—though he doesn’t speak German—his own private rebellion.

The nurse hands Calvin noise-cancelling headphones. Nothing happens till the middle of Actus Tragicus, maybe ten minutes in, but he can’t be sure because time doesn’t seem to be passing properly anymore. The viola de gamba prowls while the tenor declares his theme in minor, an ungainly bundle of notes, almost random. The countertenor follows, the same notes shifted up. The bass, transposed down. Each individual note, plucked from the throat of its singer, is dropped into Calvin’s ear, where some mystery reconstitutes them into meaning, into terror and grace, the very face of Calvin’s God.

Then, the soprano silences the fugue: Ja, komm, Herr Jesu! She’s alone, begging before the sublime. Calvin wants to wipe his tears away, but the ketamine has made his arms colossal, someone else’s arms. A single tear, salty, winds its way into his mouth, and a merciful desire wells up for something different, something bigger, ardent. The song ends: yes, come.