Hussain Ahmed is a Nigerian poet and environmentalist. He is currently an MFA candidate in poetry at the University of Mississippi. His poems are featured or forthcoming in Poetry, Kenyon Review, AGNI, Transition Magazine and elsewhere. He is the author of a chapbook Harp in a Fireplace (Newfound, 2021). Photo Credit: LaToya 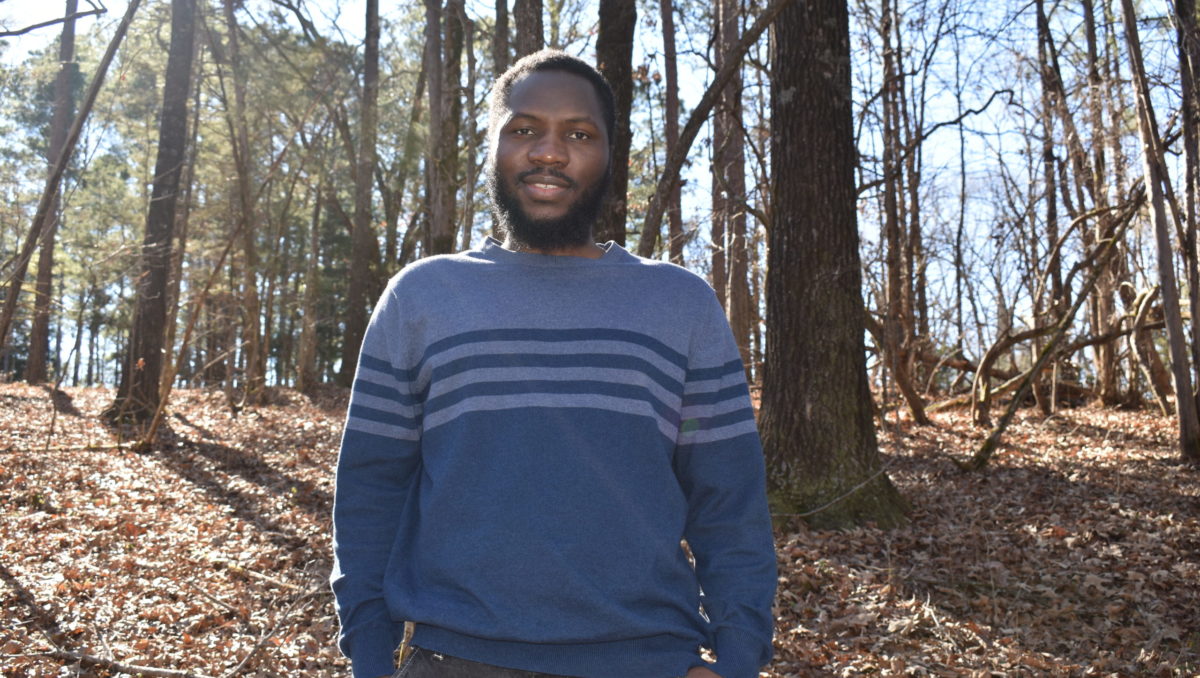 COSMOLOGY OF THE CLOUD WITH BABA AS THE RAIN MAKER

The sky is a rolag, carded with grief and dew.

We were made in the image of our dead –

because God relies on recycling

to keep the earth going around the sun.

Each of my father’s eye is a globe of brown worms,

or bulb of sperm cells swimming towards an egg in search for light.

He no longer reads the Qur’an without his glasses.

This ritual of whirling in the first rain has no origin story.

I jumped inside the rain with my hands raised to the sky.

No one stays in it for long, so it doesn’t unmake the scars

on our heads – healing and almost forgotten.

The puddle sometimes gets large, it drags a child away.

Everyone lost to the water was recovered without their eyes,

that’s how I know that fish love to swallow whatever resembles a lamp.

ABECEDARIAN AS AN ATLAS FOR AWAKENING

Because my stomach is full of water, it means I thrive on what would kill me.

Cozenage of a dark room, full of pictures on transparent plastic films,

Designed on the sides with henna, they looked like postcards for men craving the sea.

Every child in this neighborhood learned to hold their breath under water,

For that is how we can survive the memories of the floods.

Growing on the corners of our room are honeysuckles – their fragrances

Herald the memories that kept us up in the nights.

I pretended to be asleep when Baba made for the sea,

Jaborandi leaves tucked beneath the sides of his ears, since it could not be

Knitted into a boat, to carry everyone whose names were etched on his rib bones.

Laying on the floor, I imagined he’ll be back before sunrise.

My body became a pool, rippled with the belch of a frilled shark.

Next time I make it to the beach, I hope to grow gills

On this chest that has been a cupboard for a burnt atlas, kept together with

Purl stiches, that now resembles the flag of a colony that no longer exist.

Quilts in different colors kept us from the cold and they

Remain an evidence for our hastily packed bags for departure,

Since no one noticed that we headed for the sea without knowing how to swim.

Under this pink sky – harbinger for awakened griefs, logged in stomachs, or

Vagary of prolonged drought, in a time when we needed the soil to break.

When the wind whistles, I sing along and drum the table that has the

Xylography of the past I don’t want buried on the beach. I continue to

Yearn for a flicker on the face of the Mediterranean, that will resemble

Zodiac sign, for how we may survive, unlike the men before us.