Adriana Rambay Fernández is a Dominican-American writer and poet. She is the 2019 Writers of Immigration and Diaspora Fellow for Jack Jones Literary Arts. She holds an MFA from the Bennington Writing Seminars where she was a recipient of the MFA Fiction Prize. Born and raised in New Jersey, Adriana now lives, writes, and teaches yoga and meditation in Virginia. 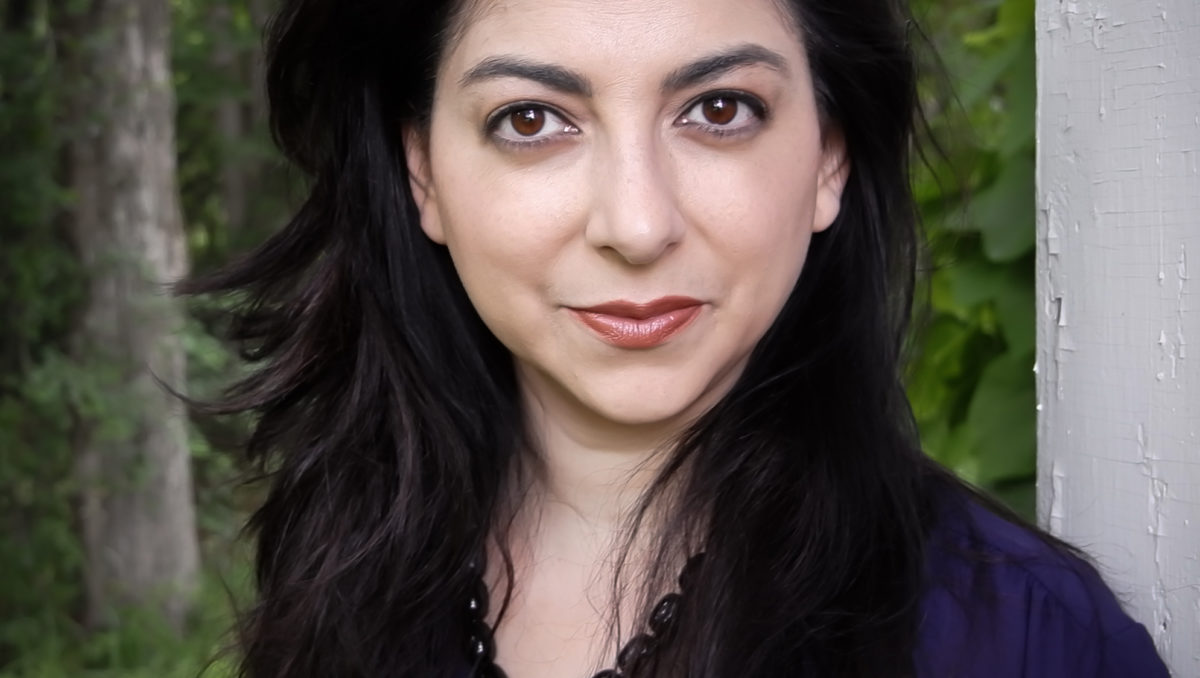 Yasmín and Berto became one body while Linda remained a constant voice in their ears, sounding cool and detached as she issued instructions.

“Roll up, release the clutch, and rock in place for thirty seconds,” Linda said. A virtual fertility coach, Linda knew and understood the couple’s internal frequencies better than they did.

“Dock and lock in,” Linda said, attuned to their every jolt and vibration.

“Locking in,” Berto said. His legs and arms entwined with Yasmín’s. He tightened his embrace.

“Locking in,” Yasmín said. She leaned into Berto and he into her, and then they rocked, shaking the headboard, which creaked from a hairline crack spreading like a vine from the middle.

Linda was a presence without physically being present, like an invisible watchful eye that saw what they weren’t seeing, sensed what was beyond their understanding. She was a couple’s last resort to make the impossible possible.

Yasmín had never met Linda in person, but she pictured her in a cocoon of sorts: in an air-conditioned booth with soundproof walls. She imagined her wearing blue scrubs and clunky white clogs, her feet up on a small shelf, her pants’ drawstrings twisting in her fingers like an umbilical cord stretched out beyond the belly button. Maybe Linda was thinking about Sunday dinner and what she would cook for her family of five. Maybe she was bored of her monthly calls with the couple, which had gone on now for six months. Maybe she was disturbed by their lack of success, how they were ruining her baby-making record.

Even though they had practiced several times during the week, it was difficult to hold still without sliding around. Linda didn’t want them to sweat. She required the room cooled to icebox levels, the use of white bamboo sheets, and several industrial-sized fans. Still, their bodies developed a cold feverish sweat. They were slippery like eels. Whatever hair wasn’t stuck to Yasmín’s face flew into Berto’s mouth from the gushing fans. He couldn’t cough lest Linda call the session over and charge them full price. They had to allow for deep listening, connection, feeling.

When Yasmín was seven years old, a nurse’s scolding was enough to make an infected blister on her inner heel disappear. The nurse shouted at her for an hour, breathing fire and spit, until all that remained on her heel was nothing more than a circle of pink, waxy flesh. The nurse told her it would have been better to chop off her foot to cure her of her stupidity. Yasmin had refused to let the blister heal, peeling it raw each time it formed. Before the nurse’s discovery, Yasmín had lived with the blister for months, hiding it from her parents, allowing it to fester into an oozing red bubble. She still had a scar, indented and round, large enough to fit the print of her thumb, a spot gone completely numb where she sometimes felt residual pain, as if the blister continued to pucker from within. If her parents were still alive, she would tell them the hurt was of her own making. She let things get out of control.

And how do you bring forth a baby when no moment is ever perfect? There was always something. Yasmín felt a strange scratching sensation inside her vagina. She had spent the morning at the beach after Linda prompted her to get more vitamin D, swim in mother earth’s embryonic waters, and walk barefoot in golden sand. Yasmín did it all, and now, the golden sand was likely scraping against her walls eliciting pleasure mixed with pain. Yasmín worried the sand would latch onto Berto’s semen and become part of the embryo. She wanted a child but not one formed out of discomfort. What if it was born with a grain of sand in the eye? Could they dislodge it with a strong gust of wind, with a burst of breath, with the fans on high?

After years of trying and failing, Yasmín wanted to do it right. She needed Linda in her ear, telling her how to move. She needed a scientist and savior, healer and witch to circumvent what was likely destined to be: Yasmín and Berto childless, living out their lives in their tiny beachside home with no beings to call their own other than a murderous cat and a lazy dog until death did them all in.

“The release is imminent,” Linda said. “Standby.” Even with her unchanging robotic voice, they felt the urgency.

Yasmín bit down on Berto’s shoulder while his nails dug deep into her back. They both wanted to scream. Instead, they held their breath to the very end.

“Initiate the baby thought,” Linda said. “Invite them in.”

Borja perched outside their window with a vicious look in his hazel-green eyes and a mouse trapped in his jaw. It was their large cat’s nature to kill small creatures and leave them on the porch. But the mouse was still alive, flailing its fleshy pink hands, pleading to be saved. “Stay with me,” Berto whispered, through clenched teeth.

Yasmín squeezed her eyes shut, yet the image of the desperate mouse remained. She pressed her lips to Berto’s ear and whispered, “We’re not alone.”